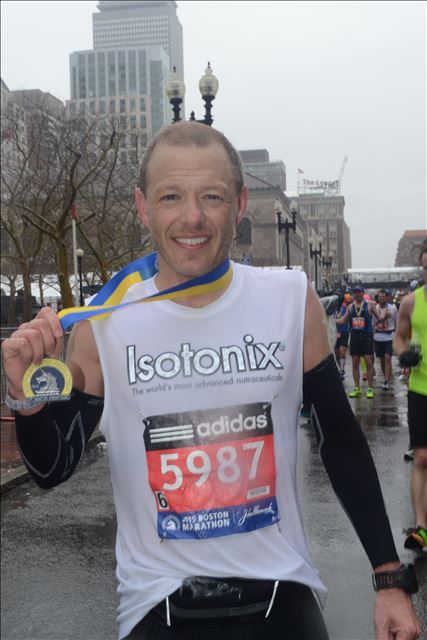 The support and encouragement I received this year going into Boston was a humbling experience like no other. I can’t say thank you enough to everyone that sent out encouraging messages and texts! If I didn’t get back to you I’m sorry and know that I appreciate each and every message. I have NEVER received so many texts, emails, and messages of support and encouragement. Close family members, high school friends that I haven’t seen in over fifteen years to people I met only days before the race. I felt like you guys were carrying me! I read every message and take every single one to heart. 2015 Boston was one of the toughest runs I’ve ever run ANYWHERE. I’m sure any other participants would agree with me. We have tough weather conditions in Minnesota and Wisconsin but running in 20-30mph headwinds with constant rain for that long will be stained in my memory.

The first sixteen miles went by similar to my previous years. The crowds were just as electric and motivating as ever. Hard to believe with that kind of weather they still showed up in full force!  Patriots Day in Massachusetts is a really big deal and these people take their marathon seriously. It was cold but I brought a throw away wind breaker that I zipped up along with gloves and a hat that kept the heat in. I kept it on until nearly the end of the race. Eventually I chucked it because my wife and friends were looking for me along the race and we decided I would be wearing the white Isotonix (my supplements of choice) shirt for easy identification.  For the most part being cold didn’t really set in until after the finish.

Any marathoner will tell you that somewhere around mile twenty, the marathon will take you to a deep dark place that will test your determination to the final finish. This marathon, with the weather conditions, took that and poured it on like no other. Heartbreak Hill is legendary in the marathon world. It’s located on the twentieth mile on the course in the little town of Newton.  This part is also known affectionately as the ‘Newton Hills’ and is placed perfectly to test what even the best marathoners are made of.  In 2013 when I was running up Heartbreak I had a cramp shoot up the back of my leg that turned my hamstring into something that felt similar to a golf ball. I pulled to the side when two generous women saw what happened and came running over to help me.  All I could do was press the muscle back in and keep pressing on. On this day every ounce of me wanted to give in and walk even just for a few seconds. My my mind and body were screaming for a break. That’s where ‘hopefully’ the heart takes over and you can dig deep for inspiration.

I didn’t see it coming into the weekend but that inspiration came from none other than my 101 year old grandmother that passed away this January. I’ve given ‘Grandma’ a lot of thought but she actually visited me in a dream the night before the race. I am NOT a superstitious person so if this sounds weird I am right there with you! Its weird. She didn’t say good luck or anything. We just had a great visit and when I woke up in the morning I felt refreshed and confident. My Grandma was the most selfless person I’ve ever met. She was raised on a dairy farm in northern Wisconsin. While my grandfather worked on the railroads she ran the farm milking cows and doing the daily chores with my father and his three other siblings. She never had the luxury of a drivers license or many other luxuries that most of us take for granted. She grew up in rural Wisconsin but when she was in her early teens she went to Chicago to help clean houses and earn money to send back to her family farm, it was the heart of the great depression. She was the epitome determination.  I kept thinking about how much she loved unconditionally and ALWAYS had time for me. If I met my ultimate goal, If I could finish strong on this cold, windy, rainy day I would mentally dedicate my run to her. A tiny token of appreciation.

Thoughts from last year came to mind. A 38 year old American Meb Keflezghi competing against the fastest mid twenty-something year olds from Ethiopia and Kenya ending a thirty one year drought from the last American winner at the Boston Marathon. It is to this day the greatest single sporting achievement I’ve ever witnessed. In my mind I kept repeating Boston strong, Meb strong, Chris strong… Boston strong, Meb strong, Chris strong. I know it sounds crazy, but I repeated this mantra hundreds of times out loud and in my head. Whatever it takes.

To be completely honest, I have no idea where the deep desire to keep putting in the work and effort into this sport comes from.  I keep thinking of a shirt I saw that read: ‘Our sport is your sport’s punishment’. I hated running growing up.  How in the world did I end up here? I just wanted to run one marathon and get it off the bucket list. All I can say is something magical happens when you step on the finish line in a Marathon. Somehow it all becomes worth it. I came into Boston prepared physically and mentally to shoot for my first sub 3 hour marathon. The days and even minutes leading up to the race the weather forecast simply wouldn’t allow for me to compete for that kind of a time. The qualification standard for my age group next year has to be 3hrs 10mins. But a 3hr 9 min marathon wouldn’t have cut it even for this years entry. We needed to beat our qualification standard by roughly two minutes to guarantee entry. That means running roughly 7 mins per mile for 26.2 miles. The new ultimate goal was to finish under 3hrs 5mins. I watched my pace closely and tried to bank a little time early in the race because I knew what Heartbreak and the hills of Brookline near the finish would bring. When I was at the top of Heart break which is the highest elevation on the course all my banked time was gone. I knew to finish under the goal I had to get my butt in gear and hope no major cramps would set in.

Those last hills were painful. I was just trying to spot a landmark in the distance and maintain form to the landmark. A little shift or twerk would have set off a chain reaction of cramping that would have sent me to the ground in sheer agony.  Marathoning isn’t like a 5K or sprint. You are physically exhausted but not out of breath.  Therefore its kind of surreal when your just asking your body to hold together.  Hamstrings don’t fail me now!  When I took that last left turn and spotted the finish line on Boylston Street I looked down at my watch and realized if I maintained pace I would come in around twenty seconds under 3:05.  Luckily that last quarter mile or so is slightly downhill.  On the left side against the guard rail about halfway down Boylston I knew I would have a welcoming committee. JoAnna, Leanne Vaillancourt (a close friend from the Boston area), and Dan Erickson(a neighbor from home whose wife Jessica was also running) were waiting for me to run by and hopefully finish strong. They got up at 6am and braved the elements and held their position just to get a good view. I didn’t finish until after 1pm. Jo has this down to a science and knows the best place to get a good viewing angle. On this day though…they deserved a medal probably more than me. It was a cold one for them and they hung in there until I crossed…Dan was out even longer as his wife was in a corral that started about thirty minutes behind me! Kudos to you Dan and Jessica!

When I crossed I stopped my watch and saw my time. 3:04:35. I did it with 25 seconds to spare. Crossing the finish is ALWAYS a magic moment but to hit the time your shooting for…thats a different animal all together. I was a little emotional to say the least..okay I may have shed a tear or two. Reminiscent of my first Boston Qualifier the Twin Cities Marathon in 2012.  The months of training back home in the sub zero winter made it worth it.

Humbling doesn’t begin to describe the gratitude I feel towards all the positive encouragement I received around this race. Back at home I missed a business conference where several of my business partners filled in for me. I can’t thank you all enough! I love my Market America family!  Thank you Dad for taking care of my girls, I know it wasn’t easy. Thank you Mom for helping Dad and also being a mentor in all things life related. Thank you to the Rooney family taking care of our Truett.  Thanks to all my extended family that sent messages…Thank you! Thank you to all my friends that sent messages of support. Thanks to the people I’ve met up with on Social Media..the Facebook Runners Anonymous, MA Fitness and the Instagram peeps I was able to meet up with. Every morning I wake up and see who is up and at it.  You guys inspire. Boston I will be back next year.  I guess it may be kind of strange to dedicate a run like this to someone..but Grandma this one was for you. Thank you for always being there. 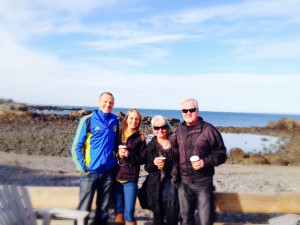 Huge thanks to Wendy and Joe Moquin for taking us up to Maine and for an authentic Lobster Roll! Also to Leanne’s brother Ross Vaillancourt for putting us up in Chelsea for a couple nights leading up to the race. 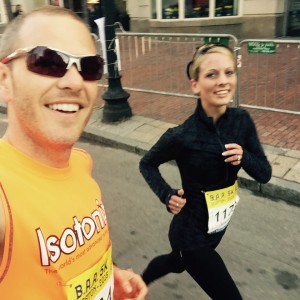 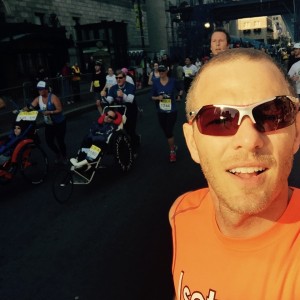 Jo and I have run the 5K the last three years leading up to the Marathon.  The last mile or so are on the actual Boston Marathon Course. Its a great way to shake out the legs and get a little taste of what it’s like to make that run down Boylston Street at the Finish. This year we even went by Dick and Rick Hoyt.  If you haven’t heard of them you MUST check out their story. They’ve completed six Ironman triathlons and 72 Marathons. I’m not a big celebrity guy but when I saw the Hoyts I kind of freaked out. 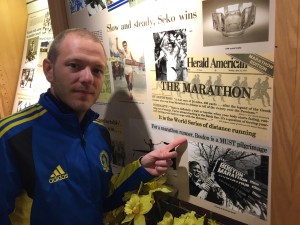 Found a really cool Boston Marathon Historical exhibit at the Faneuil Market Place.  A cutout reads: “For a marathon runner, Boston is a MUST pilgrimage”. I would agree. 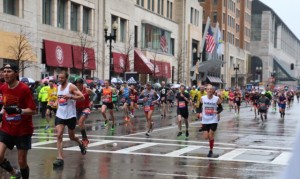 Jo got this pic on my final strides down Boylston. 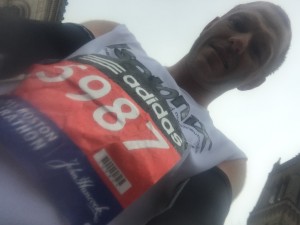 Took this shot seconds after the finish. I carry my phone with me. I get teased a little but it makes for a better tracking experience for anyone that want to follow. I use Garmin Connect. 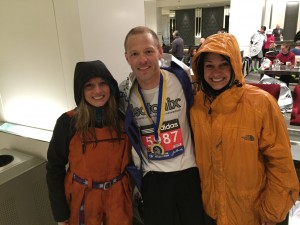 The Umpa Lumpas.  These two ladies deserve a medal as well. Up and at their usual spot near the finish at 6am. If you don’t get their early, you’ll be standing ten people deep.  If making that last turn on Boylston isn’t great enough…seeing these familiar faces definitely gave the extra needed jolt.